_
It is impossible to put the story of the life of Lady Macdonald from 1867 to 1891, when she stood beside her husband through the formative years of the new Dominion, onto one page. Books and web sites can provide some insight into those years. They both had strong characters and they faced numerous problems together, especially the continuing sadness and burden of the disabilities of their much loved daughter Mary who was born in 1869 with hydrocephalus. Until the mid-20th century there were no successful treatments; she had to be in a wheel-chair, and her parents both gave her love and care, always hoping for the possibility of a cure.


One of Sir John A's dreams was the completion of the Canadian Pacific Railway, a project which entailed a variety of problems. By 1887 it was possible to ride all the way to Vancouver, so the couple set off in their private railway car, called 'Jamaica'. As they travelled further west, Agnes insisted on riding in the engine car to see the wonderful landscapes better. Then to the stunned consternation of the accompanying officials she decided that a seat strapped onto the front of the engine, above the cowcatcher, would give her the best view. She travelled for several days on top of the cowcatcher until the terminus of the line. She wrote an account of her exhilarating experience, which was later published. Thus a legend was born, which survives to this day, as two recent songs  clearly show.
article about Lady Macdonald in 1891 > > > >

_
By that time Sir John A's age was beginning to tell. Early in 1891 he won the current general election, but he was obviously ill. In May he had the first of several strokes, and on June 6th he died quietly, with Agnes at his bedside. His body lay in state in the Senate Chamber while thousands filed past paying their final respects. After the state funeral in Ottawa, the coffin was taken by train to Kingston where he was buried. 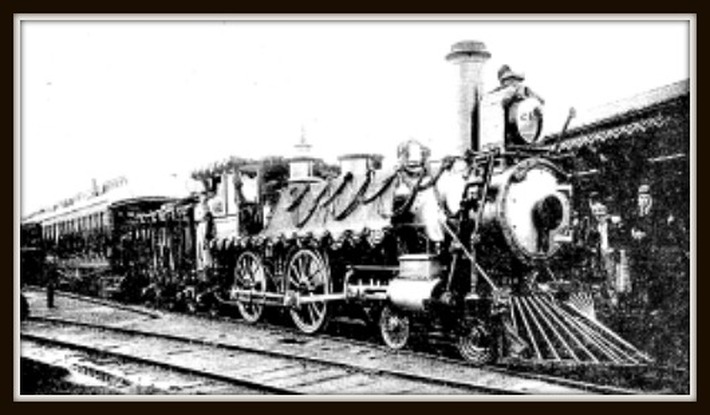