'. . . born in Jamaica, Robert Campbell was a free spirit who had run a school in Kingston and taught in Central America before he came north.'

Robert Campbell was only in the United States for about seven years, 1852-8, but much happened to him in that time, he made a considerable impact, and the rest of his life was permanently shaped. Living at first in New York, he experienced great difficulty in finding work, facing discrimination because of his colour. 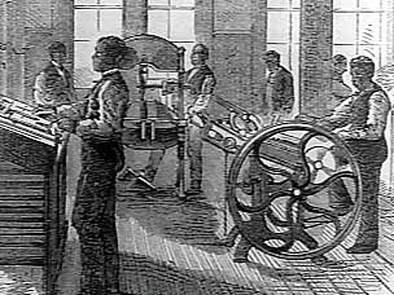 Black printers at work.
Eventually an Englishman, John Grey, gave him a job in his printery in Brooklyn, and he worked there until 1855. In that year he applied for a position at the Institute for Colored Youth in Philadelphia. The ICY (now Cheney University of Pennsylvania) had started out in the 1830s, but had had a very erratic history until the end of the 1840s, when it was set on a sound footing, particularly through the work of the principal, Charles Reason. When he retired in 1855 the board of the school appointed two men to replace him, Ebenezer Bassett as principal and Robert Campbell as assistant principal in charge of the teaching of natural sciences, geography, elementary algebra and Latin. Campbell had a good grounding in most of these subjects, but none in natural sciences, so he applied to take courses at the Franklin Institute in Philadelphia. The Institute was not prepared to admit him to their lectures on a regular basis because of his colour, but offered him a concessionary free ticket which he refused to accept. The board of ICY were then able to obtain permission for him to attend lectures at the University of Pennsylvania's Depatment of Mines, Arts and Manufactures, itself a breaking of the University's colour bar, and Campbell continued his scientific studies. He actually gave lectures on scientific subjects as evening classes at the ICY and to the Banneker Literary Institute, named for Benjamin Banneker the 18th century African-American astronomer. It is also recorded that Robert Campbell was the only African-American teacher involved in the founding of the National Teachers' Association, fore-runner of the NEA, in Philadelphia in 1857.
In spite of his progress and successes in Philadelphia Campbell presumably found the situation of a Coloured man in the United States intolerable. When he was invited by Dr Martin Delany to join an expedition of exploration and reconnaissance to West Africa in 1858 he clearly had no hesitation in resigning from ICY and leaving the USA behind. His departure from ICY was much regretted and the students gave him a great send-off, presenting him with a gold watch and chain, and, in recognition of his scientific interests, a copy of Alexander von Humboldt's Cosmos: Sketch of a Physical Description of the Universe.