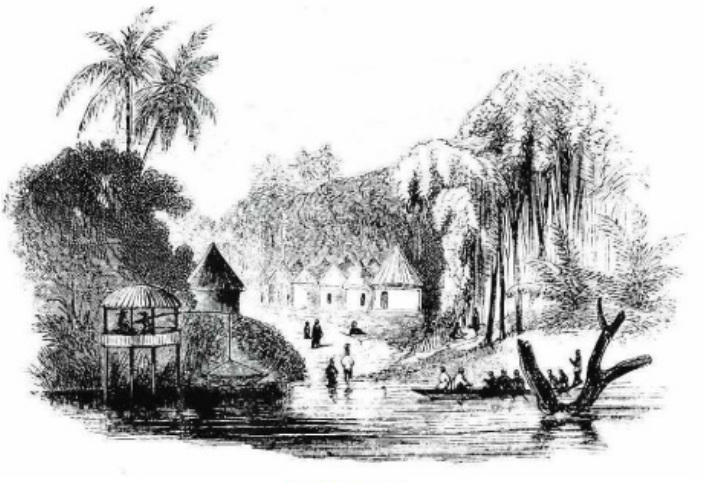 an African village
The exploration, and possibly settlement, project advocated by Delany got off to a very uncertain start. There was strong opposition among many African-Americans to the emigration schemes, whether to the Caribbean, Africa or elsewhere; there were also problems between those who supported the project, including what appeared to be a clash over leadership between Delany and Campbell, especially as Campbell was the only one remaining of those who had originally expressed intentions of going to Africa. Funding, of course, was an important issue, which also created friction.

Robert Campbell in fact left the USA for the UK in April 1859 without informing Delany, and made his own contacts there with business men and missionary and anti-slavery groups. He was particularly successful with Lancashire cotton manufacturers who were very interested in the idea of being able to obtain raw cotton from areas in West Africa. Campbell was able to leave for Africa in June 1859 with British government support and £200 in funds. When he reached Lagos he made contact with leading members of the local community, especially the Crowther family, whose patriarch, Samule Crowther, was soon to be the first African bishop of the Church of England. Campbell then proceeded inland to Abeokuta (Delany arrived soon after) where he and Delany hoped they would be able to make agreements with local tribal leaders for the setting up of a farming settlement of African-Americans. Such a 'treaty' was signed with the Alake of Abeokuta, and Delany and Campbell left Africa early in 1860, hoping the basis for a settlement was in place. In fact their 'treaty' was causing much consternation, with Government officials, missionaries and local tribal leaders, all of whom were very sceptical of the Americans' intentions.
Back in the UK Delany took the lead in contacts with businessmen and other sympathisers, and in July the African Aid Society was formed to back the settlement in West Africa; the British government, however, was having serious second thoughts and the following year withdrew support. Later in 1860 Campbell went back to America hoping to gain further backing for the Abeokuta project, but in the event the project disintegrated, largely because of the outbreak of the Civil War in 1861. Delany continued to talk of returning to Africa into 1862, but then turned to dealing with the changed situation in the USA. Campbell however had no interest in staying in America, or, apparently, in returning to Jamaica, and so made his plans to return to West Africa. He wrote a pamphlet and a book about his travels in West Africa, published in 1861 as A Pilgrimage to my Motherland; it provides a valuable first-hand account of Africa as experienced by a mid-19th century Jamaican.

Robert Campbell, his wife and four children left the USA in 1861 and after 5 months in the UK arrived in Lagos in 1862. Any plans to settle in the interior were abandoned because of on-going conflicts; Campbell lived in Lagos until his death in 1884. Lagos had been annexed by the British in 1861, in part to protect commercial interests, and one of Campbell's objectives was always to encourage the commercial activity which he saw as the life-blood of the city, which at the time had a population of around 32,000, among whom trading was the most important occupation. Campbell engaged in a variety of commercial activities - brick-making, a saw-mill, a distillery, salt and soap production - but difficult economic conditions in the region, and a certain lack of patience on his part, meant than none had any great success. He also started a newspaper, the Anglo-African, the second in the region, which ran weekly from June 1863 to December 1865; it provided local and foreign news and gave Campbell the opportunity, as editor, of encouraging interest in education and cultural activities. He was always a leading figure in organisations such as the Lagos Academy and the Lagos Scientific Society, and it is clear that he considered the 19th century English form of 'civilization' as the most likely to be beneficial to Africa's future. When he died the Lagos Observer described him as 'a man of rare intellect, and versatility of learning'.