In London in the 1920s "Dri" was a well-known and much sought-after teacher of singing and voice production. He lived in a fine house on Westbourne Road in Forest Hill and had a studio at the Grotrian Hall on Wigmore Street. The most famous of the singers who studied with him was the young Marian Anderson, then in the early years of her remarkable career. Jamaicans such as the great comedian, Ernest Cupidon, and Americans, such as Robert Abbott, owner of the Chicago Defender, spent time at his home. Sadly Louis Drysdale died in 1933, at the early age of 49; a brilliant career ended far too soon.
But who was he and where did he come from? Apparently he came from 19 North Street, Kingston, Jamaica, where George Louis Drysdale was born on December 15, 1883. His father, Edward, was an illiterate carpenter, who had very likely learned his trade from his father, Robert, also a carpenter. Ursulina Drysdale, maiden name Cole, was a cook. It seems possible that she and Edward married in 1883, after having a daughter, Marian, together in 1882. The family grew with two more children - Charles Joseph in 1886 and Isadora Louise in 1891.

Like other musicians of the time, such as T Ellis Jackson and Adeline McDermott, he appeared, new-minted, as a member of the Kingston Choral Union, in 1904. He appeared then in a concert for the Jamaica Union of Teachers, along with the well-established members of the group. By 1906 he was well enough established as a singer to be included in the group invited by Sir Alfred Jones to appear at the Colonial Products Exhibition: 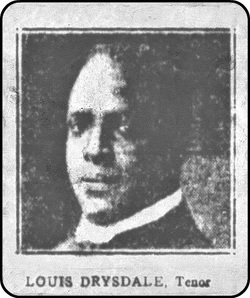 In the UK the Kingston Choral Union became famous as the Jamaica Choir during its two tours extending from 1906 to 1908. Several members, including Drysdale, decided to stay on to make use of the opportunities to improve their musical skills. It seems that with the backing of Sir Alfred, Drysdale was able to study at the Royal College of Music with outstanding operatic performers of the day. He then made a very successful career training singers, using the finest Italian methods. Although it does not seem that he ever returned to Jamaica, and apparently he and his first wife were divorced around 1911, he maintained strong links with the island. 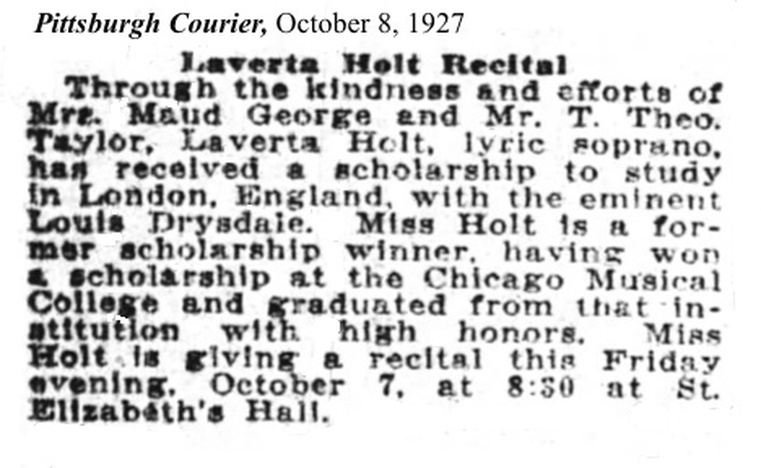 'Paul Robeson and other well known artistes have expressed their highest opinion of Prof. Drysdale as a voice culturist.'
from Gleaner obituary, 1933. 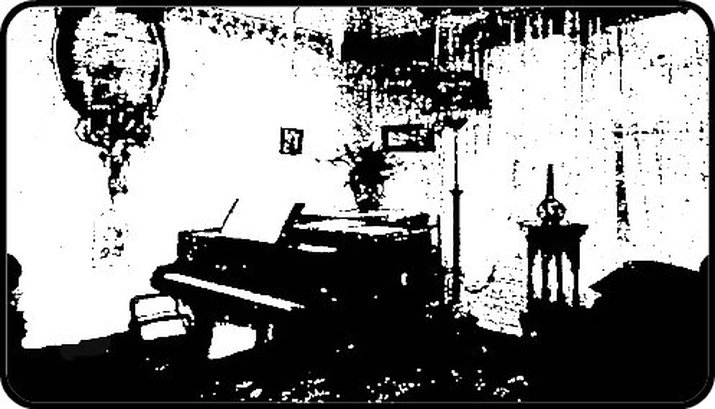 Drysdale's studio at his house in Forest Hill

Voice of St. Lucia, February 9, 1933
The Hon. T. A. Marryshow, Managing-Editor of the Grenada West Indian, who recently returned from England, writes as follows of a Jamaican who now occupies a leading place as a teacher of singing in England:    Some fourteen years ago, a black, youthful Jamaican arrived in London and was at once the object and the subject of curiosity on the part of the West Indian and African colonies in England.
His brothers-in-blood wanted to know whether he intended taking up the study of law or medicine or to go in for some other "paying profession." When Drysdale replied that he was in England to study music, to teach music, the laugh on him was both loud and long. The field was held to be so crowded with his betters, — white men, Europeans, — to whom were the exclusive "Open Sesame" of success and, with all that, failed to make a lucrative something in the poor line he fully decided to pursue, that even his closest friends of those days said: "He is crazy . What a pity! "
And the difficulties he encountered were immense. For years he suffered, sacrificed himself, in following a beckoning gleam. Was it the faint glimmer of mere candle- light set in a far-off window which of itself threw no beams of guidance along the thorny and tortuous paths to the ideal? Was it of the fitful flashes of coruscating sparks, flying upward, which mocked bis soul's passion? Was it the illusive, delusive temptations of Fata Morgana which bade him follow, only that he should end his dream in disappointment? No' It was a star. He followed that star, and he is a man of high distinction at last.

DREAM HAS COME TRUE.
Louis Drysdale rejoices to-day in the fact that his dream has come true. He is acknowledged as one of the best teachers in singing in Europe. His palatial studio in Forest Hill, London, S.E. 23, is regarded as a Mecca of Music.
I spent a Sunday with Professor Drysdale when I visited London last and I know the experiences of that day will linger for years to come.
The walls of his studio are adorned with autographed photographs of well-known singers of the world, black and white and I was privileged to read letters of thanks from them to him for his care and patience in "producing" their voices to best effect.
There was one large photograph of the late Florence Mills, inscribed "To Professor Drysdale the Master who knows," and other photographs and letters, dutifully submitted, from Roland Hayes, Paul Robeson, and Marian Anderson — the "Big Three" of Negro artists of world wide fame.
Marion Anderson, I believe, is about one of the best contraltos in the world in the department of sacred numbers. Her Handel record "He Was Despised," by the H. M. V. Gramophone Co., was the very best for the season in which it was issued.
And I saw testimonials from first-rate artists, among them Florence Cole-Talbert, who studied for a long time in Italy but who declared, so that all the world may know that Professor Drysdale, "Master Voice Culturist," did more for her in three months than she gained under teachers in Italy in three years!
I read greedily through scores of letters from prominent people in England — fathers, mothers and guardians — who placed on record their thanks to Professor Drysdale for miracles, almost, wrought with the voices of their young people.
This is how Professor Drysdale announces himself to musical circles in Great Britain--
"Louis Drysdale, Teacher of voice production and singing in the True Italian Method (Bel Canto)".
And his claim is substantiated by the best musical authorities in Great Britain.

So Louis Drysdale had died in London in 1933, and for several years Jamaicans remembered his achievements, but, as has happened to so many, his name soon faded from the Jamaican memory.

The only recent references to Louis Drysdale are in articles by Jeffrey Green, an English writer on Black history, and especially music history; these articles can be accessed through a library or at
Jeffrey green