Although Billy Blue’s place and date of birth are uncertain, convict records suggest he was born in Jamaica around 1767. By 1796 he was living at Deptford, London, and working as a chocolate-maker and also labouring on ships on the Thames. On October 4 1796 he was convicted, at Maidstone, in Kent, of stealing raw sugar and sentenced to seven years transportation. After serving over four years in the convict hulks (ships used for housing criminals), he was transported to Botany Bay, Australia, in the convict ship Minorca. He was described in the ship’s records as 'a Jamaican Negro sailor', aged 29 in 1796. 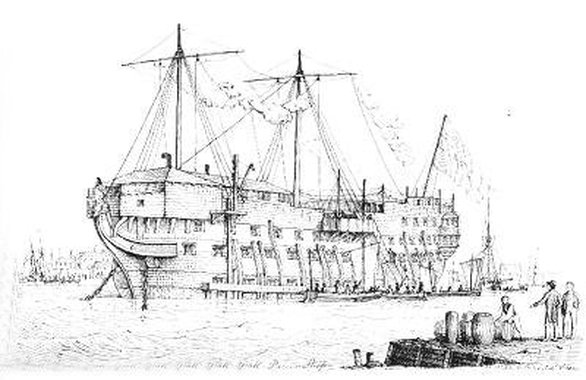 a convict hulk
He arrived in Sydney in 1801 and served out the remaining part of his sentence. In 1804, records show him living in ‘the Rocks’, then a very tough part of the city. There he met Elizabeth Williams, a 30-year-old convict from Hampshire, England, who had arrived in June 1804. On 27th April 1805, they were married at the old St. Phillip’s Anglican church in Sydney, where 5 of their 6 children were later christened.
For the next few years Billy Blue made his living around Sydney Harbour; he transported passengers in his ‘tight and clean boat’, and traded oysters and other commodities to provide food for his growing family.

In 1808 Billy Blue was among those who supported the removal of Captain Bligh, of ‘Bounty’ and breadfruit fame, as Governor of the colony, and he soon came to the notice of the new Governor, Macquarie, who used Blue’s services in getting himself and his family around the Harbour. 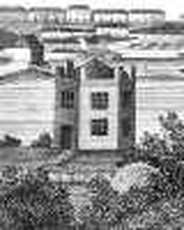 In 1811 Macquarie designated Blue as 'Watchman of the Heaving Down Place' where ships were careened, ‘Constable' and 'Water Bailiff', thus giving him wide powers of supervision over ships and traffic in the Harbour. The jobs were not well paid, but he was provided with a small hexagonal house standing in what today are the grounds of Government House, and this allowed him to move his family out of ‘The Rocks’. In 1817, the Governor, in appreciation of his work, gave a grant of 80 acres of land to William Blue and his heirs, for ever. The property, previously known as Murdering Point, was renamed Northampton Farm and the family were soon living there in a newly built house. The headland on the property became known as Blue’s Point and proved an excellent base for extending his ferry operations. When his ‘fleet’ increased from one boat to eleven, Macquarie is supposed to have said "Why, Billy, you have a regular fleet. I'll have to name you Commodore", and ever after he was known as the "Old Commodore"
Part of Billy Blue’s responsibilities was to keep an eye out for smugglers; Macquarie specifically set him to do so, allegedly saying jokingly "You watch them, Billy, and I'll watch you". Unfortunately in 1818 he was caught with two large casks of rum lashed to his boat; though he claimed he found them floating in the harbour and was taking them back to shore, he was given a year in a prison and was dismissed from his official positions. 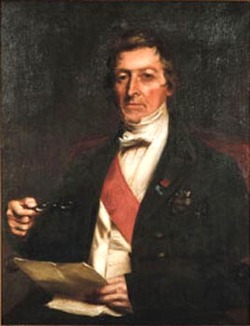 Governor Brisbane
Billy Blue continued to operate his farm and his ferry business after his release from prison, with the help of his family, especially his eldest son, William, until the time of his death. His wife Elizabeth died in 1824, and his behaviour became increasingly eccentric. He had to stave off attempts by neighbouring landowners to get him off his land and out of business, by claiming that he was a smuggler and harboured criminals. The new Governor, Brisbane, had also taken a liking to him, and protected him from these attacks. However he did have brushes with the law, being found guilty of manslaughter and of harbouring a runaway prisoner; he received the Governor’s pardon for the first and a friend paid his fine for the second.
Especially during his later years he became famous for his odd behaviour. He wore a mock naval uniform and a top hat, and would go aboard Navy ships when they arrived, as 'commodore', to welcome the officers to Sydney. He was also given to making pronouncements on various topics of the day. Mostly he was seen as a harmless old man, and was treated kindly. He had always given varying accounts of his age; when he died in 1834 there was a belief that he might have been nearly 100 years old, but almost certainly he was only in his late 60s.
Five of his children survived him, three sons and two daughters; they mixed easily into the growing population of Sydney. Various streets and city landmarks bore his name, and the legends of this sturdy, independent and intriguing character have continued to find an audience over the succeeding two centuries.